Why Am I Ten Times More Likely To Be…

Raped in Tulsa County, Oklahoma, than

ANYWHERE else in the United States

Would you believe that you are ten times more likely to be raped in Tulsa County, Oklahoma than ANY of the cities in the United States. Empirical data shows that on average between 1995 and 2012 rape crimes in the United States were going down with an average of forty per hundred thousand in 1995 down to around half that in 2011.

So where does Tulsa County Oklahoma rate.  What is very interesting though about Tulsa County’s numbers is that it depends who you are asking, a very peculiar response for such a serious topic.  According to the OSBI, Tulsa County had 474 rapes as of the time of the writing of this website.  It calls them crimes reported and does not specify what year. 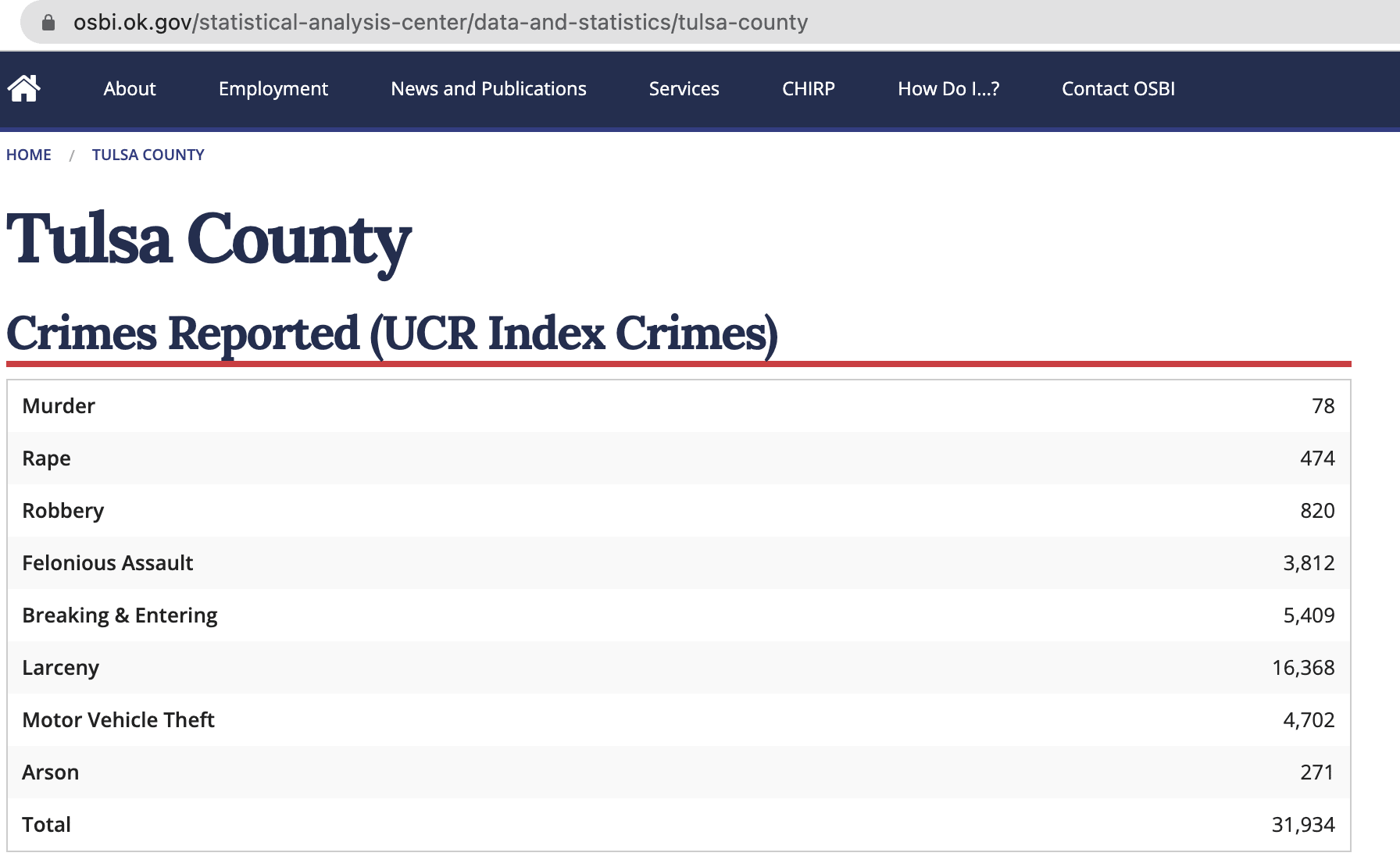 What is also ironic is that the statistic truly depends on who you ask.  For instance according to google the number was more like 378 with a population of 413,066.

One thing is for certain and that is according to the first graph at the high point in 1995 an average United States city would have 40 rapes per hundred thousand people.  Applied, at it worse, an average US city of 400,000 people would have about 160 rape related crime.  But wait, google says the actual number is two times higher and the OSBI says the number is three times higher than the average city in 1995.  Please keep in mind the graph indicates the rates decreasing by half over the 2000s, not Tulsa apparently.

In 2012 the average city Tulsa’s size per hundred thousand had rapes numbering in the twenties.  But surely we can agree that the OSBI is likely reporting accurately to third parties, right?  Well, I do not know.  When I searched more about this topic here is what I found.

But I know what you are thinking, what do other sources say.  Surely it lists our rapes into the hundreds in Tulsa County just like the OSBI says.  Neighborhood Scout says that Tulsa County Oklahoma is the second most dangerous city in the United States and last year had 378 rapes.

So which is it, Safe or Not.  Does Tulsa have less than a hundred rapes per hundred thousand?  Is Tulsa ten times worse than the National average?  After researching this topic for quiet sometime I think the answer is a perfect storm in a District Attorney that should have retired years ago, young prosecutors wanting to make a name for themselves, and prosecutors that weren’t held as a child for long enough, ya we are looking at you ADA Ashley Nix.

Ashley Nix is a perfect example of this.  She is a rape prosecutor who lied about being raped.  She is the head of Tulsa County Misdemeanor Domestic violence prosecutors but in April 2022 sat as a victim in a jury trial, her own alleged rape.  Jurors walked the Defendant after Nix all but admitted to lying.  She said she had never lived alone before and was going through a bad divorce.  A few articles about it are written on this cite and there are more to come.  She was also having a romantic affair with her supervisor Kenny Elmore.

It appears as though the Special Investigations Unit in Tulsa Oklahoma is run by Lt. Det. Darin Ehrenrich.  The lead prosecutor to this unit is Assistant District Attorney Kenny ‘Kenneth’ Elmore.  In Court filings that this reporter has read, Ehrenrich is being accused of sleeping with Nix as well. The Tulsa Jury got to hear all about her affair with Elmore.

Apparently she is somewhat of an office honey pot because there are allegations of her being reported for sleeping with yet another supervisor, ADA Matt Kehoe.  So what is going on here, does Tulsa have a rape epidemic or is something else wrong.  Are we the second most dangerous city in the country or are there only eighty rapes a year, a number more in line with the national average.

Tulsa County Prosecutors can not even convince a jury when they themselves have been raped because there are bad apples in the bunch that should be fired.  Tulsa is over charging sex crimes in order to punish minorities.  Ehrenrich, a man who’s name can be broken down to Ehren and Rich, rich meaning empire or realm and Ehren likely short for Aryan.  Aryan Realm right here in Tulsa, Oklahoma.

With Old Aryan Reich with his fingers in the honey pot there is a lethal combination.  Nix, Elmore and a third prosecutor, a blond bombshell named Allison Nutt (can’t make this stuff up) makes up the special ‘team’ at the DA office.  It probably should be noted here that Nix and Nutt could both model putting Elmore in a hot seat, he’s married.  That said in Nix’s rape trial she had to explain why she texted co-workers at 3 am in the morning, ‘ya Kenny’s wife was just knocking on the door. . . and it’s 3:30 am.’ (Paraphrasing).

Nix texted that she was worried about an HR complaint and planned on ‘deactivating’ the rape allegation, she did not.  Nix prayed the Courthouse would burn down the day after the allegation and called her own rape the mess she had created.  In fact Nix after admitting to lying to the jury still expected the jury to the convict.  Not surprisingly Nix had no family present, friends, coworkers, anyone and did not watch the verdict.  Deborah Vincent from Payne county was brought in the prosecute.  She is currently being foreclosed on and has past tax problems as is noted in a prior article on this cite.  She should have dismissed the case months ago if not years, the case allegedly occurred in 2020.

Does Tulsa have a rape epidemic or evil twisted liars in charge of some of our most trusted positions.  If anything you read in this article concerns you, it should.  I would urge you to call District Attorney Steven Kunzweiler on his cell phone (918) 261-0548.  He gave it out at the McGirt hearings in Tulsa for occasions just like this, so you can reach him.

Tulsa does not have a rape epidemic it has a leadership crisis.  Recently ADA Elmore just gave a man 4 in for beating his girlfriend to death in a domestic.  First Assistant Eric Greyless gave a man 4 in for using his dogs to maul a man to death within a mile from the Downtown Tulsa County Courthouse.  Rape carries a minimum of five years to life and requires lifetime mandatory registration.

Currently Criminal Defense Attorney Arya Adibi has been in jail awaiting his rape trial for (2.5) two and a half years.  ADA Elmore is prosecuting him.  He is recommended (25) twenty five years for allegedly raping his wife of (13) thirteen, now (15) fifteen years, in their marital bed.  They have three kids together and the year prior had divorced and remarried.  Ever since she has allegedly dated a cop and Adibi remains locked in jail.  In 2017 Elmore charged a TU soccer player with rape and he sat in jail for nearly three years before a jury walked him. He was on a scholarship and was middle eastern.

Tulsa County has crooked justice that targets minorities and is corrupt.  Marcus Harper and DeAngelo Reyes have been targeted by Tulsa Police Department (TPD) as false flags to hide TPD’s own transgressions.  It is rumored that ADA Nix now has a new rape allegation against a beloved TPD detective, hence the need for Reyes, an article previously run on this website with more, much more, to come.

Call DA Kunzweiler and demand to know, are we the second most dangerous city or are you and your associates liars.  Sadly, I think we all already know the answer.  Ehrenrich is a man incapable of leadership.  Please call the attorney general’s office if anything you read in this article made you question the judgement of Ehrenrich.

TRAFFICKING CHILDREN: ADRIENNE BARNETT AND THE BOARD OF DIRECTORS OF THE CHILD ABUSE NETWORK

RAPE PROSECUTOR LIES ABOUT HER OWN RAPE, BASICALLY ADMITS IT TO JURY